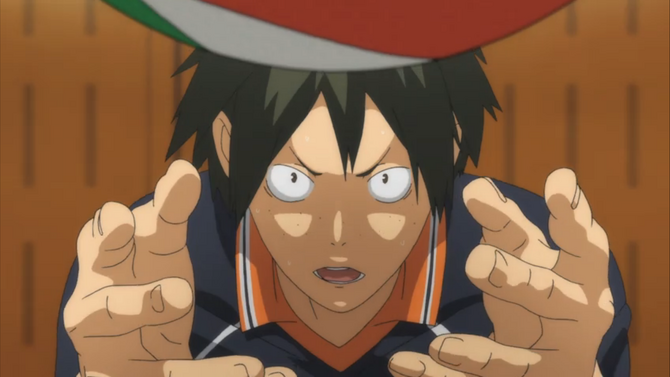 The Point that Changes the Momentum (Japanese: れをえる, Nagare wo Kaeru Ippon) is the twenty-third episode of the Haikyū!! series, written and illustrated by Haruichi Furudate and published in the manga magazine, Weekly Shōnen Jump. The episode premiered on September 7, 2014.

Aobajohsai begins to pull away in the third set, forcing Coach Ukai to make some drastic decisions. Yamaguchi is subbed in as a pinch server, but the pressure proves to be too much to overcome. A service error occurs, but the error allows Karasuno to calm down and motivates it to fight to its full efforts. Karasuno is finally right at Aobajohsai's back.

Hinata faces his opponents as he thinks to himself that this is the final set. If they lose here, it’s all over. He remembers all the opponents he’s faced so far and determines not to lose.

Hinata goes to spike and Kindaichi faces Hinata, but remembers an earlier meeting on the different signals Karasuno uses now. He notes that there has to be some pattern that he could find. He then goes to block Hinata and almost succeeds, startling the latter.

The ball goes to Aobajohsai and Oikawa receives it. Karasuno sends it back and Watari tosses it to Oikawa, who spikes and scores. Ukai watches this and notes that Watari might’ve been a setter before changing to a libero position. Aobajohsai pulls ahead after a series of attacks and Karasuno begins to get nervous. Ukai notes that while Karasuno relies heavily on individual power, Aobajohsai works more like a team, showing the two teams’ differences in strength.

Karasuno keeps up with feints and tactics that focus more on the team’s brute power. Oikawa watches uneasily as Hinata is subbed in. Aobajohsai regained its momentum, but Karasuno is still holding on. With Hinata, there’s a chance Karasuno could pull ahead.

Hinata and Kageyama try a broad cross and Hinata scores before anyone in Aobajohsai can react. Oikawa begins to get anxious, noting that they have to stop Hinata no matter what. Despite that, Hinata’s not the only threat Oikawa has to worry about.

Hinata yells for the ball and runs across the court for a broad cross. He thinks to himself that no matter how tired he gets, he can’t slow down. If he wants to continue playing, he has to always move forward. However, at that moment, two blockers run up against him and Kageyama tosses the ball hurriedly to Asahi. Asahi spikes right through Oikawa and scores. Kageyama thinks to himself that just now, it was the perfect timing for a pipe. However, he still tried to toss to Hinata. This shows just how powerful Hinata is as the ultimate decoy.

A timeout is quickly called and the players rest. Yamaguchi watches his teammates, thinking to himself that the rallies are continuing longer than they did in the first two sets. Still, Yamaguchi envies them for even being on the court. At Aobajohsai’s side, Irihata tells the players to simply get rid of the broad attack.

The match resumes and Hinata goes to do a broad jump, but none of Aobajohsai’s blockers go to him. Instead, only the libero faces Hinata in the back. This position gives Watari the perfect angle to receive the ball, effectively stopping the broad. As Karasuno hesitates afterward, Oikawa takes this chance to pull off a dump. It soon becomes Oikawa’s turn to serve again and in its anxiety, Karasuno starts making mistakes.

Despite that, the ball is kept in play and Hinata goes for a spike. However, he gets blocked completely. Aobajohsai is now three points ahead and Ukai quickly calls a timeout. He gathers the players around and tries to think of something he can use to change the momentum. Suddenly, he realizes something and looks towards Shimada in the bleachers.

The match resumes and suddenly, Yamaguchi’s switched in. Shimada worries, noting that Yamaguchi could only pull off the jump float due to luck. Yamaguchi looks as nervous as Shimada is and after stepping onto the court, is immediately overwhelmed by the atmosphere. His teammates encourage him, but are secretly anxious for the first year.

Yamaguchi prepares himself, but his anxiety shows right through. He thinks to himself that he’s scared, but he has to show his skills. He serves, but it hits the net and Aobajohsai reaches the twenties. Yamaguchi is switched out and he apologizes, but Daichi calls after him and tells him to do better next time. Despite this failure, Karasuno’s mood suddenly changes.

The next move, Tanaka spikes right off of the libero. The entire team celebrates, seemingly regaining its confidence and liveliness. Both teams are starting to show fatigue, except for Kunimi, surprising Kageyama. However, Karasuno continues at its momentum and catches up to Aobajohsai. Still, Aobajohsai shows no hint of giving in and Karasuno realizes its opponents want to win as much as it does.

Aobajohsai reaches set point and Karasuno worries that it would win. Nishinoya suddenly yells at his teammates to keep looking forward, motivating everyone. They face forward again as Tanaka goes up to serve. He thinks to himself that he can’t mess up this serve, no matter what. The ball gets sent back to Karasuno after and Tanaka receives it with his shoulders in his desperation.

As it’s going back over to Aobajohsai, Kageyama runs right up and snatches the ball right out of Oikawa’s hands. He sends a one-hand toss to Hinata and the middle blocker spikes, scoring for Karasuno.

Retrieved from "https://haikyuu.fandom.com/wiki/The_Point_that_Changes_the_Momentum_(Episode)?oldid=95197"
Community content is available under CC-BY-SA unless otherwise noted.