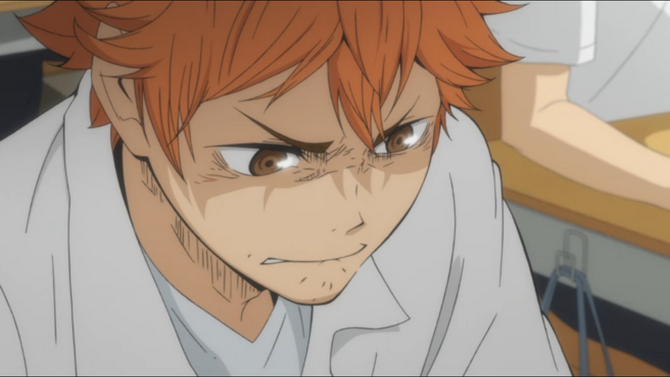 The Third Day (Japanese: , Mikkame) is the twenty-fifth episode of the Haikyū!! series, written and illustrated by Haruichi Furudate and published in the manga magazine, Weekly Shōnen Jump. The episode premiered on September 21, 2014.

After suffering a heartbreaking loss to Aobajohsai, the third-years must decide if they will retire or participate in the spring tournament. Kageyama and Hinata vent their frustration in the gym and determine to keep moving forward. The winner of the fall tournament is revealed, and Karasuno begins its first real practice to get ready for the spring tournament.

In a series of flashbacks, Hinata remembers the matches he played, all the matches he won and the one he lost. In the present, he’s back in school. All the different members of the team can’t seem to concentrate in class, the memories of the Interhigh still fresh in their minds. Elsewhere, Aobajohsai and Shiratorizawa face off.

At lunchtime, Hinata runs to the gym instead of eating. In the second years’ end, Tanaka states that Daichi wants to go to nationals. They can’t keep thinking about a match they just lose. In another area, Daichi states to Asahi and Sugawara that they should retire. He thought that they would be able to go to Tokyo together but after seeing the first and second years handling the team, he thinks he can leave the team in good hands a little earlier. Sugawara stops him and asks him if that’s how he truly feels. After listening to his friend reason with him, Daichi admits loudly that he wants to stay.

Outside the gym, Hinata’s tossing a ball back and forth, thinking of every mistake he made during the matches. At the same time, Kageyama’s thinking of Oikawa and how different they are as setters. In his classroom, Yamaguchi looks at his uniform and remembers an earlier encounter with Shimada. Shimada asked if he had fun before and Yamaguchi replies vehemently that he didn’t. All this time, he’d been satisfied with only cheering on his teammates from the side. However, he wants more now. Volleyball has taken on a completely new meaning for him.

In the faculty room, Takeda meets with a teacher, who reveals to him the third years’ intent of staying on the team. He asks Takeda to try to reason with the third years and advise them to take their future into account.

Elsewhere, Ukai converses with Takinoue and reveals that he canceled practice to let the members recover. Takinoue notes that Aobajohsai was strong. Karasuno didn’t have a chance this time but still, it didn’t give in. At the same time, Aobajohsai has lost to Shiratorizawa in the finals of Interhigh.

At the gym, Hinata sees Kageyama already practicing inside. He joins him as the third years are called in by Takeda at his office. Takeda explains to them that no matter what they want from volleyball, they have to consider their futures. He warns them to not make any decisions that they would regret.

Back at the gym, Hinata asks Kageyama if finals are going on right now. Kageyama confirms it and angrily, Hinata climbs onto the top balcony, screaming in frustration. Kageyama joins him until the two are exhausted. Hinata states that he wants to win and Kageyama replies that he won’t apologize anymore. He won’t give anymore tosses he has to apologize for. They have to keep moving forward.

Just then, Kiyoko and the second years come in. As they’re greeting one another, Yamaguchi and Tsukishima arrive. Tanaka and Nishinoya remark that they still have to wait for the third-years. Hinata gets nervous, afraid that the third-years are going to retire.

Suddenly, they arrive and Kiyoko faces the underclassmen with a smile, announcing that they’re staying. Sugawara tells everyone that they’re going to head to nationals together. Ukai then arrives, surprised that everyone’s actually here despite practice having been canceled. The members surround him, asking him to continue coaching them.

Karasuno soon holds a meeting. Ukai states that they only lost because of a difference in strength level. Still, they shouldn’t be held down because of one defeat. He asks Daichi to speak and the captain announces that they’re going to nationals in Tokyo. Their goal is to go there once more.

Practice starts and Hinata thinks to himself that a tall wall looms before him. On his own, he has never been able to see the other side. However, he has a team now, and he can reach for the view from the top.

Retrieved from "https://haikyuu.fandom.com/wiki/The_Third_Day_(Episode)?oldid=95199"
Community content is available under CC-BY-SA unless otherwise noted.