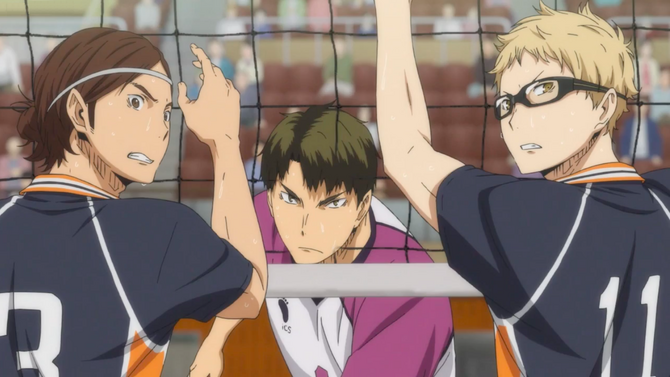 "The Threat of "Left" (Japanese: “”の, "Hidari" no Kyōi) is the second episode of Haikyū!! Karasuno High School vs. Shiratorizawa Academy High School, based on the manga Haikyū!! by Haruichi Furudate. The episode premiered on October 14th, 2016.

Karasuno tries their best against Ushijima and his team in the first set, though it is difficult. Facing a left-handed player is rare, and it shows when Nishinoya continues to have trouble receiving Ushijima's powerful spikes. Unsurprisingly, Shiratorizawa takes the set 25-16 but Karasuno refuses to give up without a fight, with the will to block Ushijima and stopping their opponents from scoring any more points.

Shiratorizawa has taken the first point of the game after Nishinoya was unable to receive Ushijima's spike. The team encourages him not to worry about it and the game continues with Kawanishi serving. Daichi sees the ball heading for him but guesses it will go out and does not receive only for it to land in bounds.

Kawanishi serves again and the ball grazes the top of the net. Asahi and Tanaka call for the ball but freeze when they see the other going to cover, allowing the ball to land and giving Shiratorizawa another point. Kageyama notices how everyone is nervous and Sugawara angrily shouts out for the players to stop being so worked up, earning him a warning glare from the referee. Kawanishi serves again and Daichi receives.

Kageyama sets to Tsukishima but his spike is received by Goshiki. Reon sends the last hit to Ushijima who spikes and scores when Nishinoya is unable to receive again. While Ushijima is receiving praise from the cheering squad, Nishinoya requests the team to give him three chances; promising that he will get use to Ushijima's spikes.

In the stands, Saeko now realizes what had been bugging her about Ushijima as she now sees that he is left-handed and this most likely being the reason he approaches to spike from the right side of the court. Takinoue confirms her realization and adds that having a player like Ushijima being opposite of the setter may be the reason why Karasuno had started with a different rotation; in order to have a skilled all-round receiver like Daichi positioned where Ushijima's spike would most likely be sent. He adds that players like Ushijima are always ready for an attack from either the front or back row and normally do not serve or receive. Akiteru says that players like Ushijima use to be labeled 'Super Ace'.

Ushijima lands another spike, putting the Karasuno team on edge until the next play when Tanaka lands a clean spike past Ushijima and Tendō. He is given great praise from the team for scoring their first point. Saeko also praises her brother before continuing to question why Ushijima is a difficult opponent.

Takinoue explains that most of the time the Karasuno team faces players who are normally right-handed. Blockers will position themselves in front of the opposing spiker's dominant hand in order to get a better chance at blocking. But if they are faced with an opponent who spikes in a way they are not used to then it is certain that the blockers will miss.

After Shiratorizawa scores their eighth point, a technical time-out takes place. Yachi explains to Saeko that this takes place only in a five-set match when either team reaches eight or sixteen points. Ukai reminds the team that blocking comes down to timing and to try to at least be able to touch the ball even if they can't stop it in order to pressure Ushijima to remind him of Karasuno's wall.

The time-out ends and the game continues. Right away, Ushijima spikes and scores despite Tsukishima having gotten a one-touch, bringing the score to a six-point gap. In a brief flashback, Nishinoya states that while Shiratorizawa has Ushijima, Karasuno has him. Ukai agrees and goes on to say that while they are aware they cannot stop all of Ushijima's attacks they just need to focus on making the impossible spikes possible. Calling it the Total Defence. This plan would have the blockers force Ushijima into a line shot and the ball going directly to where Nishinoya will be positioned.

The flashback ends and Ushijimia is up to spike again as he is faced with a triple block. Even with spot-on timing to block, Ushijima makes it through and the ball goes right to Nishinoya. The Karasuno libero momentarily has control of the ball before it continues out. Nishinoya remains calm and focuses back on the game.

Goshiki next serves and Tanaka receives but it is sent back to Shiratorizawa. Ushijima is sent the last hit and Tsukishima realizes he and Asahi jumped to block too early. Ushijima lands a powerful spike that sends the ball bouncing toward the ceiling. Seeing Tsukishima focusing on the timing of the blocks, Tadashi recalls when he had spoken to Tsukishima on whether he believed he would be able to stop any of Ushijima's spikes and Tsukishima admitted there was no way he would be able to beat Ushijima.

Tsukishima misses a block by Kawanishi as he has been focusing too much on the timing for Ushijima. With the score now 15-07, Kawanishi goes to serve but sends the ball directly into the net. As Asahi serves, Akiteru notes how his brother is a player who relies more on what his eyes process and does not count on the instincts he has honed. At Ushijima's next spike, Tsukishima quickly positions himself to block with perfect timing; something Ushijima himself notices but is still able to get past Tsukishima.

With Shiratorizawa reaching sixteen points, another technical time-out is called. Akiteru sees how Tsukishima was able to get in the path of Ushijima's spike but questions why he wasn't able to block. Despite being complimented by Hinata and Ennoshita on how close he is to receiving Ushijima's spikes, Nishinoya believes that Ushijima is not spiking at his full strength.

Tadashi becomes slightly panicked when he notices Tsukishima's finger is jammed from the last block attempt. As Ennoshita tapes his finger, Tsukishima questions his last block; wondering if he hesitated but instead realizes he believed he would lose.

The time-out ends and Takeda tries to encourage the team to stay relaxed until they see Ushijima is up to serve. Takeda becomes nervous at seeing Ushijima prepare to spike, believing that his serves could possibly be as devastating as his spikes. Ukai agrees that while Ushijima does not have the same kind of control as Oikawa, the power behind the serve could still be as devastating.

Ushijima serves and Daichi attempts to save but the ball is sent out. Tsukishima is silently grateful that he is not in the position to receive and realizes that Karasuno may have to surrender the first set as it seems nearly impossible for them to catch up with a nine-point difference. He then looks over to Nishinoya who is completely focused as Ushijima prepares to serve again. Ushijima serves and Daichi is barely able to hold himself back as Nishinoya positions himself and receives the ball, sending it straight into the air and surprising the Karasuno team.

Kageyama jumps in a spiking motion, causing Tendō and Reon to jump to block until Kageyama suddenly changes to a setting potion and sends the ball to Tanaka who lands a spike. Asahi and Daichi marvel at Nishinoya keeping his word of being able to get use to Ushijima's hits and are determined not to just stand around. Tanaka is impressed at how Kageyama seems so calm despite the team they are playing against and Kageyama explains this is because no one frightens him more than Oikawa.

At the next rally, Sugawara is subbed in for Tsukishima as Hinata rotates in; his height and position catching the attention of Tendō. Sugawara serves and aims right for Ushijima but Reon instead receives the serve, seeming to confirm that he will not go after a serve. Shirabu sets to Tendō who uses a time lag attack to throw Hinata off and lands his spike. Tsukishima is subbed back in.

Reon serves but it lands out. Kageyama serves next and lands a service ace. Ukai is impressed at how Kageyama and Nishinoya are able to play like they normally do despite they are facing Shiratorizawa. Kageyama serves again and Reon receives. Shirabu sends the last to Goshiki. He lands a straight shot and right away wonders if his team noticed only to see Ushijima complimenting Reon on his receive.

The next rally plays out as Asahi attempts to spike but the ball is picked up by Reon. Goshiki sends the ball to Ushijima who spikes past Hinata and Tanaka but Nishinoya is able to get the ball up though it's off. Tanaka sends Hinata the last hit and Hinata does the rebound off Goshiki's hand for another setup. Asahi sends the ball to Kagyema as Hinata charges forward. He jumps to the side and spikes past Tendō only for Ushijima to receive the spike, surprising everyone. Ushijima calls for Shirabu to give him the last hit and he spikes past Kageyama, Hinata and Tanaka with great force, thus winning the first set for Shiratorizawa.

As the teams switch sides, Tendō notices how Ushijima is paying close attention to Hinata and questions him on it. Ushijima reveals he had met Hinata earlier and Hinata had promised that he and Karausno would beat Shiratorizawa and make it to nationals. Tendō believes that Ushijima finds Hinata amusing but Ushijima denies this saying that he dislikes Hinata because of his confidences that does not seem to have a basis.

Ukai is advising the team not to panic despite that Ushijima alone scored nearly half of the winning points for his team. He then points out that because Ushijima is being sent the ball so much, the remaining players on the Shiratorizawa team are becoming frustrated. He reminds them that Ushijima will eventually reach the end of his stamina and will begin to make mistakes.

The second set begins and Goshiki serves first. Daichi is able to receive the serve, annoying Goshiki, and Karasuno launches the synchronized attack. Kageyama sets the ball to Daichi and Yamagata is unable to receive his spike, getting Karasuno the first point of the set.

Ushijima next serves and the ball hits Tanaka straight on his forehead but sends it back over the net and landing before Yamagata can save it. Tanaka tries to play this off as his intended plan but Tsukishima points out how he looks to be in pain.

As Hinata rotates in he claims he will show Ushijima who the stronger team is and causing Sugawara to question Hinata's behavior. Yamaguchi reveals that Hinata had run into Ushijima not too long ago and the two had a 'scuffle', sending Sugawara into a panic from thinking Hinata is picking fights with other schools.

At the next chance ball, Hinata calls for the ball and Kageyama sends him the new quick. Hinata spikes only to suddenly be blocked by Tendō.

Tendō informs Hinata and Kageyama that if they wish to beat Ushijima, they will have to beat him first.

Retrieved from "https://haikyuu.fandom.com/wiki/The_Threat_of_%22Left%22_(Episode)?oldid=94462"
Community content is available under CC-BY-SA unless otherwise noted.