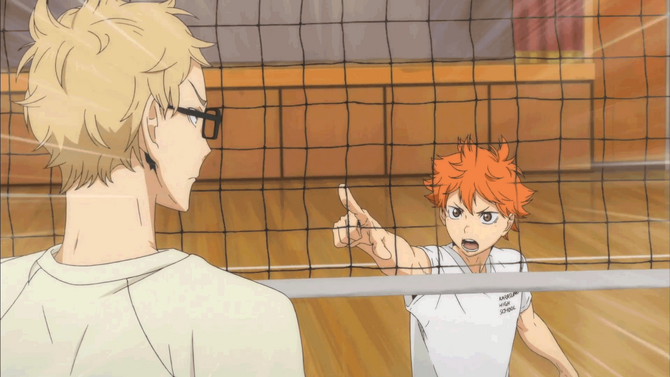 "The View From the Summit" (Japanese: の, Itadaki no Keshiki) is the fourth episode of the Haikyū!! series, written and illustrated by Haruichi Furudate and published in the manga magazine, Weekly Shōnen Jump. The episode premiered on April 27, 2014.

The practice match that will determine Kageyama and Hinata's future with the Karasuno High Volleyball Club begins as Kageyama, Hinata, and Tanaka battle Tsukishima, Yamaguchi, and captain Daichi in a 3-on-3 match. Kageyama and Hinata can't coordinate initially due to Kageyama's old setting habits and constant harassment from Tsukishima but with encouragement from Sugawara, they manage to figure out a way to utilize their skills to create the perfect attack.

In Kageyama's dream of a match in junior high, he’s exhausted while tossing to his teammates, demanding them to move faster. He tosses one last time, but no one’s there to spike it, and Kageyama sees his teammates with their backs to him. Kindaichi yells that they’re done with Kageyama, calling him an egocentric King. Kageyama looks down at himself to see a cape around himself and a crown on his head.

The next day, the 3-on-3 match begins. Hinata's shocked to hear that Daichi's joining Tsukishima and Yamaguchi's side but Daichi reassures him, stating that he has Tanaka who’s good at offensive attacks. Tsukishima then taunts Kageyama, Hinata, and Tanaka, angering the three. Tanaka announces that they’ll beat Tsukishima to a pulp.

The match starts and Tanaka easily blasts through Tsukishima’s block. Hinata jumps and spikes, surprising everyone with the height he can reach, but he gets blocked effortlessly by Tsukishima. This continues, giving Tsukishima's team the lead. He mocks Hinata’s lack of height and then brings up Kageyama’s “King’s toss” and the impact it had on his ex-teammates. Kageyama coolly tells Tsukishima to shut up before walking away.

The match continues and Kageyama serves confidently. However, to his and Hinata’s surprise, it’s received successfully by Daichi. Daichi tells Kageyama that he doesn’t have the talent Kageyama does, but he has more experience. It won’t be that easy to get points off of him. Hinata’s impressed by this while Kageyama’s unnerved. Tsukishima brings up Kageyama’s past again and Hinata angrily asks him about it. Tsukishima asks Hinata if he knows why Kageyama’s called King. Hinata replies that it’s because Kageyama’s skilled and intimidates his opponents. However, Tsukishima corrects him, explaining that his nickname actually came from his own teammates due to his egocentric personality. This behavior led to Kageyama getting benched during one of his last matches in junior high.

In a flashback, Kindaichi got blocked and while Kunimi and other teammates were reassuring him, Kageyama yelled at him to move faster. Kageyama tossed to him in the next move, but Kindaichi couldn’t hit it. He complained that the tosses were too reckless but Kageyama refused to acknowledge it, noting that if they couldn’t get past the blocks, they wouldn’t be able to win. Desiring to get to Nationals, Kageyama commanded his teammates to move faster and jump higher only to turn around to see them with their backs to him. Then, at the match point of the first set, Kageyama tossed but no one went after it. His coach then benched him.

Kageyama then speaks up, stating that tossing only to find no one there frightens him. Hinata interrupts and reminds Kageyama that that happened in junior high. He feels that Kageyama now tosses just fine, surprising the setter. Hinata continues that right now, what matters is defeating Tsukishima and becoming official members, not Kageyama’s past.

Tsukishima serves to Tanaka who sends the ball to Kageyama. The setter doesn’t think Hinata can beat Tsukishima one-on-one so he decides to give the ball to Tanaka. However, Hinata quickly gets behind the setter, exclaiming that he’s here now. Even though his spike went out, Hinata isn’t discouraged. He tells Kageyama that he’ll take any toss, hit any ball, and jump anywhere so Kageyama has to toss to him.

Tanaka approaches the two excitedly, asking them if they know how to do quicks due to their previous attack. Hinata doesn’t know what those are since he just hits whatever he wants. Kageyama replies that a quick is impossible for them anyway since they’re not coordinated. Hinata gets insulted and yells at him, only to garner another taunt from Tsukishima. The blocker tells him that just being reckless won’t help since some people just aren’t cut out for some things, spiking for instance. Hinata agrees with him, saying that during junior high, he would always get blocked. His jumping power couldn’t fight against the blockers’ height, but the Small Giant was different. Despite his small stature, he easily blasted through blockers twice his size; Hinata wants to be like that so he doesn’t care if he’s cut out for being a spiker or not. With this body, he’ll aim to win as much as he can. Kageyama looks at him, reminded of his own feelings during junior high. Tsukishima rebukes Hinata, but Kageyama steps up to his defence, exclaiming that clearing the path for the spiker is the setter’s job.

He then pulls Hinata away and announces that he’s going to try quicks with Hinata. Tanaka’s skeptical but the duo is adamant on their decision. Kageyama tosses to Hinata but he can’t get the hang of it initially, which annoys Kageyama. As the setter's yelling at Hinata, Sugawara intervenes, stating that he’s acting like he did in junior high. Sugawara remarks that Hinata’s not skilled but has speed and agility. Kageyama should try to match his tosses to Hinata’s style instead of having the spiker move to him. Sugawara sadly adds that Kageyama has skill, good concentration, and everything Sugawara doesn't have so watching his match during junior high made the third year feel inferior.

Shocked, Kageyama announces that he will adhere to Hinata’s style. He tells the latter to move at his quickest speed and jump at his highest height. Hinata agrees and the match resumes. Taking into account his surroundings, Kageyama tosses the ball to Hinata at the perfect moment and Hinata scores before anyone can react.

As Hinata lands, Daichi points out in shock that Hinata had his eyes closed, surprising everyone. Hinata replies that he closed his eyes because Kageyama told him to not watch the ball. The latter’s perplexed at Hinata’s complete trust in his tosses but realizes that he can now utilize all of Hinata’s skills to his advantage.

The next few quicks fail but this time, Kageyama’s blaming himself instead of his teammate and admitting that despite the failures, he’s actually having fun. Hinata feels the same way, noting to himself that the feeling of the ball hitting his hand is really the best.

The next move, Hinata runs to Kageyama to spike and Tsukishima falls for it, yelling at Yamaguchi to move closer to him so they could block Hinata. However, at the last minute, Hinata switches gears and runs towards the opposite direction. He thinks to himself that he has to stay ahead, even if it’s only a second faster. As long as he can out-run his opponents, he will be able to win. As he spikes, he thinks to himself that this is the highest point he can reach. He was never able to see the other side of the wall by himself but now, he has Kageyama.

Retrieved from "https://haikyuu.fandom.com/wiki/The_View_From_the_Summit_(Episode)?oldid=95121"
Community content is available under CC-BY-SA unless otherwise noted.