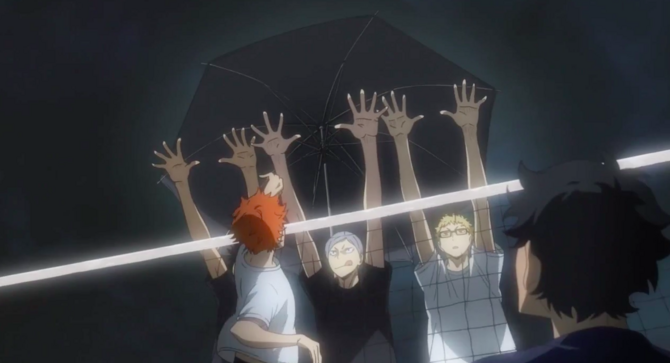 Umbrella (Japanese: VS , VS Kasa) is the ninth episode of Haikyū!! Second Season, based on the manga Haikyū!! by Haruichi Furudate. The episode premiered on November 29, 2015.

Karasuno is up against Nekoma in a practice match, and Hinata recognizes that Kageyama had subconsciously tossed the ball the way he used to when Hinata's eyes were closed. The middle blocker points this out, so Kageyama decides to practice on his own in order to give Hinata the exact tosses he wants. This causes Hinata to be free to join Tsukishima's practices with Kuroo, Akaashi and Bokuto. Lev joins in, and their 3-on-3 match gives Hinata the chance to learn new moves he could use against future opponents.

Yachi begins narrating a letter to her mother while she and Kiyoko are preparing water bottles for the team. She covers several events when the team appears to run the hill after losing another game. She especially notes how the tension between Hinata and Kageyama is still present and, even though they are now practicing together, still are not talking.

As Karasuno plays against Fukurōdani, Yachi continues to narrate how certain players have been during the camp and how she hopes to see the new quick attack before the training camp ends.

Karasuno next plays against Nekoma. Tanaka sends the last hit to Hinata but it is too close to the net and Hinata is beaten by Lev in a joust. Hinata becomes visibly agitated, believing he is not improving at all, and several players on the team, including Kageyama, notice his frustration; saying they have never seen him in such a manner before.

During the next rally, Kageyama sets a toss to Hinata. Hinata is able to barely spike the ball and score but had noticed it was different from the sets Kageyama had recently been trying. He openly calls Kageyama out on this; claiming Kageyama was 'going easy on him'.

Kageyama does not believe he has but Hinata points out that he did not try the new 'falling' set. Ukai realizes Hinata is correct; seeing the set Kageyama had just done was more like the previous quick sets. He realizes that Kageyama must have done this subconsciously after seeing how stressed Hinata has been at not being able to land any powerful spikes lately.

Kageyama realizes Hinata was right about the set and tries to walk off until Hinata tells him to keep trying. Later during the free practice, Kageyama tells Hinata that he will not be practicing the new set with him and instead plans to practice alone in order to get the toss right.

Not wanting to be left behind, Hinata runs off to the third gym. He is spotted by Bokuto and questioned by Tsukishima of why he isn't practicing with Kageyama. Hinata explains that Kageyama is working out alone and he tried to practice with Kenma but only got five sets from him, which Kuroo exclaims is an amazing feat alone.

Hinata then asks if he can join their practice at the same time Lev appears and makes the same request. Kuroo questions Lev about why he is there and not practicing with Yaku. After Lev claims Yaku let him leave early (in truth Lev actually ran away), Kuroo offers the group the chance for a 3-on-3 game.

After the group splits into two teams, Akaashi points out how they are imbalanced by the three taller players (Kuroo, Lev and Tsukishima) being on one team while the other has the shorter players (Bokuto, Akaashi and Hinata).

Hinata is very excited about being able to play alongside the ace and setter of Tokyo's champion team and against Tsukishima. Kuroo waves off Akaashi's statement saying they should take this chance while they can. The game begins but does not last long when the Fukurōdani managers appear and inform the boys that if they want to get dinner before it's too late they need to wrap up their practice. At the fear of not being able to eat, the game is halted and the players begin to leave. Hinata wants to continue playing and is assured by Kuroo that they will be able to continue the next day; which Hinata eagerly agrees to.

The next day Karasuno continues to lose matches but they are noted by other teams to be getting better as it is becoming harder for them to win against Karasuno. During the free practice, Kageyama is practicing the new toss alone but his tosses fail to hit their target. Ukai advises Kageyama to try to visualize the position of the spiker when he tosses.

In the third gym, Kuroo is giving advice to Lev, Tsukishima and Hinata about the best ways to block opponents. Tsukishima questions Kuroo of why he is giving advice as they may be opponents in the future. Kuroo first tries to pass it off as always being nice but, after seeing Hinata and Tsukishima's face of disbelief, he admits that he wants to make the Trashcan Showdown a reality as it is the biggest wish of their coaches. In order to make it happen, Karasuno needs all the strength they can get to be able to face Nekoma one day and he is willing to do what he can to help.

They soon begin a game and Team Cats soon takes the lead over Team Owls. When Bokuto is about to spike, Kuroo advises Lev and Tsukishima how to best block him. Instead, Bokuto hits the ball purposely against Lev's hand to bring the ball back for another setup. This time, he is successful at dodging the two and lands a spike.

Hinata, having noticed the technique Bokuto used, questions him if it was done on purpose. Bokuto confirms this, saying the method was called a rebound (or tipping into the block). Hinata is easily impressed, flattering Bokuto in the process; which Kuroo notes Hinata to be a natural at. Bokuto then explains how the rebound is done but that it also carries risks if not done correctly. He also tells Hinata that as long as one keeps calm he will know what to do at the moment of truth. The game then proceeds. Akaashi is able to save a ball that Bokuto, in turn, sends the last hit to Hinata. The taller players take this chance to gang up on Hinata, which Bokuto calls them out on. Akaashi refers to this as going against an umbrella instead of a wall as there is nowhere for Hinata to hit.

Hinata, however, remembers Bokuto's advice on staying calm and is able to hit a shot against Lev's fingertips and out of bounce. Kuroo questions if Hinata aimed the ball, doing what is called a block out. Hinata admits that he did aim at the tip of Lev's hand, much to Lev's annoyance, but that his aim is normally not that accurate and therefore it was a fluke it worked. Regardless, Bokuto greatly praises Hinata for the shot and going against 'a two-meter wall'. He is so impressed that he then offers to teach Hinata a 'special attack', to which Hinata becomes instantly excited for.

At the same time, Kageyama is now landing the new set after following Ukai's advice.

The next day, Yachi and Hinata exchange a quick talk and Hinata tells her that he has a new attack he hopes to do during a game. Daichi is then shown overhearing a conversation between Coach Nekomata and one of the Shinzen coaches.

After losing to Fukurōdani, the Nekoma team realize how difficult it is for any team to beat Fukurōdani. They then watch Karasuno do a flying lap penalty after losing to Ubugawa. Yaku comments at how serious Karasuno's shorty (Hinata) seems to take the lap and Lev makes the mistake of commenting on how Yaku is possibly not any taller than Hinata; resulting in Yaku kicking him in anger.

After the lap, Tanaka voices his frustration of the team not being able to win. Daichi then steps up and informs them that he had overheard the coaches talking and had been considering keeping quiet but decides to tell the team as seeing how they need some inspiration. He informs the team that he had heard the coaches will be throwing a barbeque for the teams once the games are done.

Several members of Fukurōdani learn they will be playing Karasuno next and some express that they find Karasuno tricky to play against as they never know what methods the team will try. They believe the Karasuno players are becoming exhausted only to look over and see Tanaka, Hinata, Nishinoya and Kageyama dancing and singing of the barbeque; much to everyone's confusion.

Yachi later wishes Hinata luck in the game and that she hopes to see the new quick attack. After hesitating a moment, Hinata goes over to Kageyama and tells him he'd like to try the new quick. Kageyama tells him it may not be a good idea as he believes he still has not gotten the set right.

Yachi, having listened to Hinata and Kageyama, now realizes the reason Hinata became angry during the Nekoma game. It was because he felt Kageyama showed doubt in being able to do the new quick set while Hinata never doubted he could.

The team gathers around Ukai who asks that the team be able to make some of their new attacks work and to try to keep Bokuto in check. The team quickly reflects on all the work they have done during the course of the training camp before Ukai dismisses them with the promise of a meal after the game.

Retrieved from "https://haikyuu.fandom.com/wiki/Umbrella_(Episode)?oldid=95456"
Community content is available under CC-BY-SA unless otherwise noted.