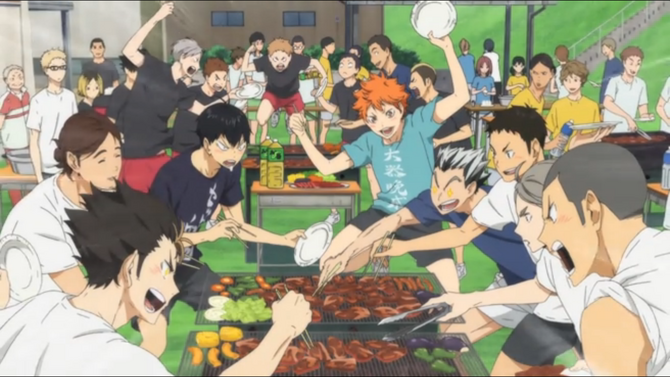 Up Above (Japanese: , Ue) is the eleventh episode of Haikyū!! Second Season, based on the manga Haikyū!! by Haruichi Furudate. The episode will be premiered on December 12, 2015.

With Bokuto in his dejected mode, Karasuno learns from first-hand experience why Fukurōdani is considered one of the top volleyball teams in Tokyo. Fukurōdani ends up winning the match, with Bokuto scoring the final point. The training camp comes to an end with a barbecue for the players. Karasuno returns back to school to continue practicing and honing in their skills, and other volleyball teams of Miyagi are busy practicing for the Spring High Tournament.

With Bokuto in a dejected state, the Karasuno team believes they now have the perfect chance to win. As the game proceeds the Fukurōdani team continues to play as if nothing is wrong, eventually bringing the score to a tie and then getting the lead after Akaashi does a setter dump to the annoyance of Tsukishima and Kageyama.

As the next rally continues, each member of the Fukurōdani team remarks how they are used to Bokuto's mood swings and how the smallest things can either lift his spirits or bring him crashing down so easily. As Fukurōdani comes to match point, Ukai comes to the realization that Bokuto is not the one who leads the team but the team leads the way for Bokuto.

At the same time, Tsukishima also comes to the same realization but also notes that there is no individual on their team that is scarier than Bokuto. After a successful block, Karasuno has scored another point, now being one point away from a deuce.

Asahi does the next serve but Ukai notices that he did not do the jump serve. About to receive the ball, Akaashi realizes that Karasuno should have figured out what kind of team Fukurōdani is by now and notices that Bokuto is becoming restless in wanting the ball. Because Karasuno has lowered their guard and are not focusing on the ace, Akaashi sends the final hit to Bokuto. With silent encouragement from his team, Bokuto lands a powerful spike past Kageyama and Tsukishima and wins the game. After a quick acknowledgment between each other, the Fukurōdani teammates begin to praise Bokuto for landing the final spike and thus bringing him out of his slump and back to his normal self.

Watching this interaction, Ukai notes how Bokuto's weaknesses draws out the strength of the rest of the team and becomes the foundation for them to remain a solid team.

Asahi apologizes to the team and to Ukai about his serve, claiming it was a serve that was begging for the team to be attacked. Ukai instead informs them that realizing one's own mistake will determine if they have what it takes to fight back and stay on top and that no one on the team will blame one single person for hitting a serve that is meant to take the win. Ukai also praises that, even though the team had lost nearly every game during the week, their new attack methods had been able to get by a national-level team.

Takeda steps forward and reminds the team that while their new strategies are working they are still not onto the level in which they can take down national level teams just yet and that they should not believe their abilities are limited to how they are now. The team then proudly do their very final penalty lap of training camp.

Shortly thereafter, Nishinoya asks Asahi to hit a few of his tosses and Tanaka asks to join. Sugawara also asks to join, causing the three to believe he will be tossing to them but instead he says that he will be hitting.

Standing at the gym doors, Kageyama remarks how if they had been able to do at least one more quick attack they could have won the game. Hinata encourages Kageyama that with their new method of attack they will now be stronger and have a better chance at success against new opponents.

Off to the side, the third years reflect on how they will be having the spring national preliminaries shortly after their return to Miyagi. Asahi becomes nervous hearing this and fears that, if they do not get passed the prelims they will never return to any of the training camps again and their time playing volleyball will be over. He is immediately yelled at and hit by Sugawara for being negative and Daichi assures them that they will make it and continue returning to the training camps. Asahi and Sugawara note how Daichi presented himself in a manner similar to Kageyama, causing Daichi to imitate the setter yelling at Hinata to which Hinata feels while in another location with Kageyama.

The teams soon gather outside in preparation for the barbecue. Tsukishima speaks with Akaashi about how even someone like Bokuto can be brought down. Akaashi goes on to explain that Bokuto can self destruct when the team is doing something they don't fully understand but that he never seems to be in down spirits when faced against a strong opponent and is able to lift the spirits of those on the team who may be feeling down. This is the reason the team sees Bokuto as the most reliable member.

Hinata appears and informs Bokuto that if they were ever in a real match against one another that Karasuno would not lose. Bokuto happily accepts the challenge. After the coaches praise the teams for all their hard work during the camp, the players begin to help themselves to the barbecue.

Several players of different teams eat and interact together such as Akaashi helping Kageyama when he eats too much in one bite, Kuroo and Bokuto apparently having a meat-eating contest and Nishinoya, Tanaka and Yamamoto teaming up together to prevent guys from other teams hitting on Kiyoko. Tsukishima and Kenma are approached by Daichi, Kuroo and Bokuto to eat more food. While eating together, Yaku notes to Sugawara that Yachi seems to be acting strangely. Nervously, Yachi feels she is surrounded by giants and fears trying to get food for herself as she believes she may accidentally be grilled and eaten. The Ubugawa captain, Masaki Gōra, spots Yachi and offers her food only for Yachi to panic and eat a piece of charred meat. Asahi and several of the players around her quickly offer her tea and water but she is so terrified she is not able to answer them.

While Bokuto is being admired by Hinata for being one of the top five aces' in the nation, Kuroo points out that there is an ace near Miyagi who is one of the top three ace's. Hinata's attention is quickly diverted from Bokuto upon hearing this, to Bokuto's displeasure, and Lev questions who the remaining aces are.

Kuroo explains the current top three aces's being Wakatoshi Ushijima from the Tohoku region, Wakatsu Kiryū from the Kyushu region and Kiyoomi Sakusa from the Kanto region. Tsukishima points out that Ushiwaka is the ace that is closest to Miyagi and Bokuto declares Tsukishima should not be intimidated by Ushijima after having practiced against his spikes. Kuroo goes on to say that just because these three players are the top ace's it does not mean that their teams are the top teams; though he reveals that Sakusa's team, Itachiyama, is the heavy favorite to win the nationals.

As the barbecue comes to an end, Takeda once again thanks Coach Nekomata for giving the team the chance to take part in the training camp. Both reflect how the teams seem to have changed during the course of the week and how this will carry on into the future. Coach Nekomata voices that he wishes for the teams to finish a game with no fears and having put nothing but their best efforts into everything they do.

As the Karasuno team begins to leave, Hinata voices how he hates being weak but with there being so many strong players 'above' him he can't help but get excited. The team departs while bidding farewell to all of the teams.

Now at Karasuno, Takeda goes over the upcoming tournament and how the team will be in the first round. Yachi begins to get nervous and Kiyoko realizes this will be her first tournament. She then notes that for herself and the third-year players it will be the last to which Yachi becomes tearful and tries to pass it off as a bug in her eye. The team begins practicing their serves, including Tadashi who is practicing his jump float. Though he tries not to aim at Nishinoya the ball goes directly to the libero, to Tadashi's disappointment even though Nishinoya says it was difficult for him to reach.

Tsukishima returns home and is surprised to find his older brother, Akiteru, has returned. The two sit outside in the backyard as they slowly catch up. Akiteru questions if Tsukishima wonders why he continues volleyball after he had not been able to make it onto the team when he was in high school. Akiteru admits that he never wanted to stop playing. He recalls his special moment of hitting a spike and having the crowd cheer for him. Tsukishima recalls Bokuto's words of getting hooked on volleyball when that special moment happens. Akiteru says he will not stop because he loves the game so much.

At Ikkei Ukai's court, Hinata and Kageyama practice the new quick attack and finally succeed on their final hit.

A brief montage shows several teams preparing for the tournament, including Ushijima as he recalls Hinata's words of how he will defeat him and go on to nationals.

The episode ends with Takeda voicing the new day as the beginning of the Spring High School Volleyball Championship.

Retrieved from "https://haikyuu.fandom.com/wiki/Up_Above_(Episode)?oldid=92149"
Community content is available under CC-BY-SA unless otherwise noted.