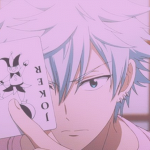 I generally don't watch any anime of the sports genre, as I'm not into sports even in real life. But one day, when I was searching for a series to watch and I felt like there are no more anime from the genre I really like, I decided to give Haikyuu!! a try since many of my friends seem to like the series a lot. I must say that I'm glad I gave it a try as after I finished watching I knew then that it really is a must-watch. Since the anime ended at the finals match between Karasuno and Shiratorizawa, I continued to the manga. I now have another additional manga series to keep me going!

Retrieved from "https://haikyuu.fandom.com/wiki/User:PerseusHunt?oldid=66145"
Community content is available under CC-BY-SA unless otherwise noted.