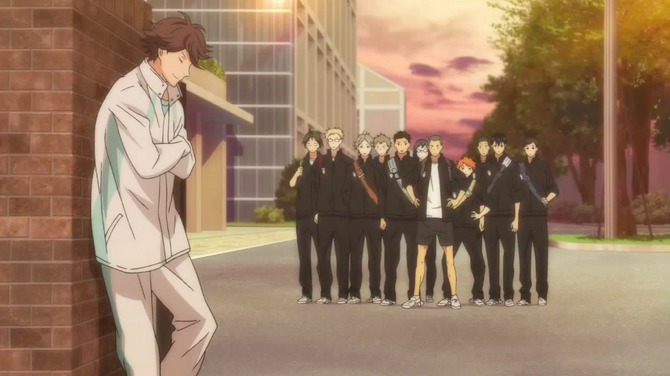 Versus the Great King
VS 大王様 ● VS Dai Ōsama
Director: Kantoku Sakuga ● Scenario: Taku Kishimoto ● Production: Susumu Mitsunaka
Aired: May 18, 2014
← An Interesting Team ● He Who Is Called "Ace" →

Versus the Great King (Japanese: VS , VS Dai Ōsama) is the seventh episode of the Haikyū!! series, written and illustrated by Haruichi Furudate and published in the manga magazine, Weekly Shōnen Jump. The episode premiered on May 18, 2014.

Oikawa suddenly shows up for the practice match. He is revealed to be Aobajohsai's captain and official setter. He is also Kageyama's senpai from middle school. Oikawa enters the game and immediately targets his perfect serves at Tsukishima who can't receive them properly; this allows Aobajohsai to catch up to Karasuno. It isn't until Daichi changes their formation that Karasuno is finally able to win the match against Aobajohsai. However, Oikawa says that when they next meet, Aobajohsai will be using all of its aces from the start, and a very different result will be expected. As they leave, Daichi reveals that Karasuno also has a few surprises. Their libero, Yū Nishinoya, is about to return and completely change Karasuno's dynamics as a team.

Just as Karasuno takes the second set, Aobajohsai's captain and official setter Tōru Oikawa suddenly arrives. Having just recovered from a knee injury, he is only now able to return to practice. Irihata admonishes Oikawa and warns him to be more careful; especially since Oikawa was the one who requested the practice match against Karasuno (and in turn, against Kageyama).

A couple of fangirls on the balcony wish Oikawa well and he waves at them. Their squealing irritates Tanaka and he asks Kageyama who the 'nice guy' is. Kageyama reveals that Oikawa was his senpai in middle school and is an extremely strong player with a personality even worse than Tsukishima's, leading to Hinata immediately dubbing him as the "Great King".

Irihata orders Oikawa to warm up more than usual and while he's away, Karasuno manages to bring the score to 24-21 in their favor. However, Oikawa soon switches in as a pitch server. To Karasuno's shock, Oikawa has figured out that Hinata and Tsukishima are weak receivers, and perfectly serves the ball at Tsukishima, gaining two points for Aobajohsai. Sugawara realizes that Oikawa's serve is not only more powerful than Kageyama's, but also has great control.

With one point left before Aobajohsai catches up, Hinata tries to get Oikawa to aim at him. When Tsukishima tells him to cut it out, Hinata repeats Tanaka's earlier words (that in volleyball, everyone on your side of the net is your ally) to Tsukishima's annoyance. Daichi then decides to change their formation by having Hinata, Tsukishima, Tanaka, and Ennoshita spread out, giving Daichi more area to defend. Unfazed at the captain's attempt to counterattack, Oikawa continues to target Tsukishima. However, his accuracy comes at the cost of power and Tsukishima is finally able to return his serve. The ball becomes a chance ball for Aobajohsai, but when Kindaichi attempts to spike it, he is blocked by Hinata. Using his quick speed, Hinata sprints to the other side of the court and Kageyama sets the ball to him. Hinata then spikes it directly past Oikawa, resulting in Karasuno's win. While the rest of Aobajohsai is upset by the loss, Oikawa smiles after getting to see Hinata and Kageyama's freak quick in action.

Awestruck over the practice match, Takeda gives Karasuno a small speech about how even he could tell something amazing just occurred and how simple encounters can create synergies. While he can't prove what's he's saying, he is positive that Karasuno will become strong because of such encounters. He slightly panics when he sees that he confused Kageyama and Hinata, but Daichi assures him that his speech was perfectly fine.

Outside the bathroom, Kageyama approaches Kindaichi. Before he can say anything, however, Kindaichi tells him not to apologize. He still sees Kageyama as an oppressive king and vows to not lose next time. In return, Kageyama declares that next time, Karasuno will win again. Their conversation is cut short when Hinata accidentally interrupts the two of them. As Kageyama and Hinata leave, Kunimi approaches Kindaichi, who feels defeated after hearing Kageyama finally acknowledge that he's on a team.

As Karasuno leaves Aobajohsai, Daichi admits that if the two teams were to have an actual match, Karasuno would be lacking. Oikawa, who is waiting for them at the front entrance, chimes in that he agrees. While he does compliment Hinata's spike and insists that both teams should go all out in their next match, he also points out that Karasuno needs to work on their receives; he plans on perfecting his already-powerful serve and there are others on his team who can serve like him as well. He then instructs Karasuno to not lose in Inter-High, as he wants to beat Kageyama in an official match, setter-on-setter. After Oikawa leaves, Kageyama tells Daichi not to worry over Oikawa's provocations, but Daichi laughs in response. He admits that Karasuno's receives do need improvement; something that can't happen overnight. However, he hints that "Guardian Deity of Karasuno" will be coming back soon.

Back at Aobajohsai's gym, Oikawa and Iwaizumi talk about Kageyama while cleaning up. Both of them agree that he has become more amazing in the time they haven't seen him. Although he and Kageyama are evenly matched players, Oikawa admits that there is probably no one in the prefecture who can match Kageyama's toss. Because of this, he believes Aobajohsai should focus on Karasuno's receivers for there is no reason to worry if the ball never makes it to the setter.

At their gym, Karasuno wraps up a team meeting. As they begin their own cleanup, Daichi and Takeda talk privately on the side. Although they won the practice match, Daichi is aware of his team's weaknesses and is unsure if they can continue on without professional guidance. Having also realized this, Takeda reveals that he is searching for a coach and even has a lead. Asking Daichi to leave it to him, he promises to definitely deliver results. Meanwhile, Yamaguchi finds a broken mop in the equipment room. When he asks if it should be thrown out, Sugawara quickly stops him as Daichi watches the exchange from the doorway.

As the team heads home together, Tanaka, Hinata, and Kageyama stop at the Sakanoshita Shop to buy meat buns. Unfortunately, they learn that the soccer team already bought all of them. Taking pity on the three, the shopkeeper throws them Gun Gun Bars while shouting that they should go home and eat a proper meal. As they happily leave, the shopkeeper answers a phone call and becomes irritated after recognizing who the caller is.

Outside, Tanaka asks Kageyama why he is attending Karasuno instead of Shiratorizawa, the high school whose volleyball team is the strongest in Miyagi. Kageyama reveals that he didn't receive a recommendation from them and he didn't pass the school's entrance exam. He then reveals that he came to Karasuno because he heard that Coach Ukai, an outstanding coach who took Karasuno to nationals in the past, was coming out of retirement. Although Coach Ukai ultimately didn't return, Kageyama decided to stay since he would be going up against other high schoolers no matter where he went. Eventually, the conversation turns to how they barely won against Aobajohsai. Kageyama notes how Karasuno doesn't have a libero or an ace spiker. The return of the "Guardian Deity of Karasuno" is mentioned again and Hinata looks forward to meeting him.

The next day, Kageyama is alone in the gym. He serves a ball towards a water bottle on the other side of the court, but just as it looks like it will hit, Hinata suddenly appears. He returns the ball, but ends up sending it up onto the balcony. As Hinata goes off to retrieve it, Kageyama serves again. To his shock, someone rushes into the gym and perfectly receives the ball - both by stopping its momentum and rotation, and by sending it to where the setter would be. As the newcomer picks up his thrown jacket, Hinata approaches him and realizes that he is actually taller than the newcomer.

Retrieved from "https://haikyuu.fandom.com/wiki/Versus_the_Great_King_(Episode)?oldid=95126"
Community content is available under CC-BY-SA unless otherwise noted.