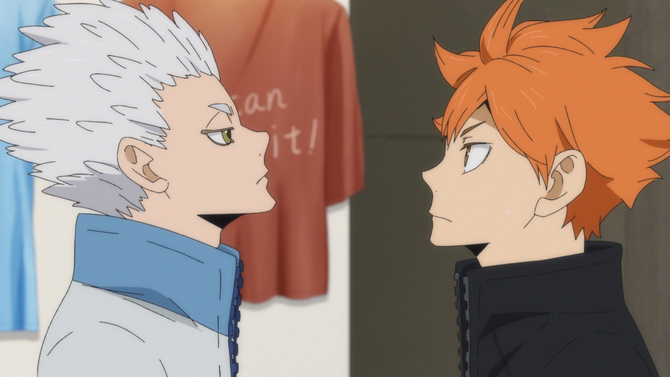 "Vivid" (Japanese: , Senretsu) is the twelfth episode of Haikyū!! To The Top, based on the manga Haikyū!! by Haruichi Furudate. The episode premiered on March 27, 2020.

Karasuno has won their match and are advancing to the second round of the Spring Tournament. The Fukurōdani team hit a snag in their game when Bokuto falls into a depressed state and Akaashi does what he can to bring the ace back to top form.

Fukurōdani plays their first game against Eiwa High School. Bokuto attempts to land a spike but it's received and the Eiwa team scores instead. Fukurōdani is now two points behind when the team notice that Bokuto has fallen into another one of his moods. As Coach Takeyuki Yamiji calls for a time-out, students of the Eiwa school are relieved to see that the game is going easier than expected since it had been believed that Bokuto would pose the greatest threat to them. When Komi attempts to cheer Bokuto up, the team becomes annoyed when the ace reveals that the reason he is depressed is due to not being able to play in the main arena. Akaashi determines this is Bokuto's weakness number 6, in which Bokuto is an absolute showoff.

Daichi calls for the team to line-up and spots Tashiro and Kurokawa in the stands congratulating their victory in the first round. When he points the two out to Sugawara and Asahi, Daichi becomes surprised at learning they had spotted the two during the game and realizes that he was much more nervous than he originally believed.

Afterwards, Tashiro and Kurokawa meet up with the team. Tashiro points out Daichi's large appearance that Daichi mistakenly believes as Tashiro calling him fat while the second years greet Kurokawa. Yamaguchi and Hinata figure out that the two are the former upperclassmen of the current second and third years. Daichi calls the first years over and introduces Tashiro and Kurokawa to them as being the previous captains of the team. After the first years depart, Kurokawa questions Daichi about Kageyama and Hinata.

Daichi reveals that Kageyama is the team setter who was recently picked to attend the All-Japan Youth Camp and Hinata is an energetic player not known until he entered high school though can be a force to be reckoned with. Kurokawa says that other schools can also see Karasuno as a great force and urges them to win their next round before departing with Tashiro who was upset at not being the one to tell the team to win their next game.

While eating their bento's, Karasuno watches Nekoma's game against Kiyokawa. Kiyokawa's ace, Ryoji Yamazaki, lands a spike past Yaku but the next attempt is picked up by the Nekoma libero. Yamazaki continues to make numerous spike attempts but Nekoma is able to receive each one. Sugawara tries to calm Asahi down when he sees the ace relating to Kiyokawa's ace and they watch as Yamazaki is eventually forced to hit a ball that lands out of bounds from not having anywhere to put the ball.

Kuroo gets a one touch on a spike. Kenma sets to Fukunaga who lands a back corner shot and wins the game for Nekoma. After the match, Daichi allows the others to go shopping. Hinata heads to the t-shirt stand with Yamaguchi accompanying him and purchases the "Way of the Ace" shirt.

Back at Court E, Bokuto continues to express his frustration at how they are playing in the sub-arena instead of the main arena as he wanted to play with a bigger audience watching. His teammates berate themselves for letting their guard down concerning Bokuto's mood swings. They did not anticipate the ace becoming depressed so soon due to playing their game so early compared to the previous year when they played at the end of the day and the crowd had mostly departed by then. While Bokuto continues to get scolded by their coach, the rest of the Fukurōdani team returns to the court with the confidence that Bokuto will eventually come out of his state.

As the game continues, Fukurōdani is starting to catch up in points. When Akaashi makes a receive, Konoha looks to attempt a direct spike but changes to a set and Sarukui scores. Akaashi sees Bokuto is starting to come out of his mood and continues to try to bring him out of it when a time-out is called.

Akaashi tries to convince Bokuto that they are playing on what could be considered the center court. He tells Bokuto that even though the main arena holds more people, there's the chance that only a quarter of them would be paying attention to him because of other games going on at the same time. Because their game is the only one currently taking place, all of the attention is on them and the ace. Bokuto is starting to believe what Akaashi is telling him but the setter sees that he still needs one more push to get Bokuto back in top form. He is able to do that when he spots Hinata in the crowd and tells Bokuto that his disciple has come to watch him play. Seeing that Bokuto is looking his way, Hinata calls out to the ace while holding up the "Way of the Ace" shirt.

The teams return to the court and Bokuto is soon faced against a triple block. Now out of his state, Bokuto spikes a straight shot that lands right on the line. Akaashi is pleased at seeing Bokuto back to his regular self and thinks the ace is even more motivated because the cheers of the crowd are closer and clearer in the sub-arena than they would be in the main arena. When Fukurōdani reaches match point, Bokuto lands a powerful cross shot and Fukurōdani wins the game.

While Bokuto meets with Hinata, Sarukui compliments Akaashi on spotting the Karasuno middle blocker and using his presence to help Bokuto recover. Akaashi himself is surprised that he was able to spot Hinata in the crowd but says that they would have found another way to help Bokuto if Hinata hadn't been there. Konoha tries to convince Akaashi that he can ignore the ace at times but does admit that he is glad Akaashi is able to bring Bokuto back around when he does get into one of his depressed states. Although he admits that he is only able to bring out a small portion of Bokuto's true abilities, Akaashi says that he is satisfied when watching him play in top form. Sarukui suggests telling this directly to Bokuto but Konoha quickly shuts down the idea when he declares that such information would make Bokuto have a bigger ego.

While heading back to meet with their team, Hinata and Yamaguchi excitedly go over the Fukurōdani game as they pass by the t-shirt stand where Hinata comes face to face with Hoshiumi. The two right away begin staring at each other as Yamaguchi asks if Hinata knows Hoshiumi. Hinata answers that he doesn't know him but is still determined not to break eye contact. They are interrupted when Kageyama appears and greets Hoshiumi before introducing him to Hinata and Yamaguchi as someone who also attended the Youth Camp.

Hoshiumi right away questions Hinata on his position, height and apex of his jump. Though annoyed at hearing Hinata is a middle blocker, Hoshiumi is greatly satisfied at being taller and having a higher jump. At that moment, Hoshiumi's teammate, second year middle blocker Sachirō Hirugami, appears and informs Hoshiumi their game will soon begin. Hoshiumi bids farewell to Kageyama and stares at Hinata once more before following Hirugami to their game.

While Ukai is still held up with acquaintences of his grandfather, the Karasuno team goes to watch the game between Kamomedai and Chikuida. Many on the team are right away impressed at seeing Hoshiumi playing and Yamaguchi questions why he has never seen Hoshiumi in magazines given how well known he must be. Kageyama explains that Hoshiumi greatly dislikes being interviewed. Hinata quickly leaves to watch the game from a closer vantage point where he watches Hoshiumi repeatedly score with spikes, feints and block-outs. When Hoshiumi lands a service ace, the announcers refer to him as a "Little Giant".

Back in the stands, Sugawara points out that Hinata has never been afraid to accept challenges from players as big as two meters but now has come across someone with similar height who possesses greater skill than him. Sugawara wonders if Hinata may possibly have a hard time overcoming the shock of this.

Kamomedai wins their game in straight sets and Hoshiumi is approached by a female reporter, later known as Fumi Enaga. Though she congratulates his teams victory and praises his skills, she right away questions how Hoshiumi felt playing against people who were on average 180 cm or taller when he himself only stands around 169 cm.

To the side, Hirugami right away sees that Enaga made the mistake of asking Hoshiumi about his height. Annoyed, Hoshiumi right away begins to rant at how he should not be recognized for his height and already knows that being smaller in volleyball puts someone at a disadvantage, though it does not make them useless. Hirugami quickly intervenes and stops Hoshiumi's rant, pointing out that Hoshiumi has stated himself that his height puts him at a disadvantage to others and is very self-conscious before making the wing spiker apologize to Enaga. When he is released by Hirugami, Hoshiumi spots Hinata standing to the side. Hinata bows to the second year before leaving.

Hinata makes it back to his team as they are getting ready to leave and expresses his joy in having been able to make it to the Spring Tournament. Hoshiumi is frustrated that people like Hinata and Kageyama act like players such as himself are common and not something to be surprised at.

As they leave the stadium, Karasuno meets with Nekoma. Kuroo congratulates the team for not having lost their first game and making the long trip home, though Sugawara points out they did not journey far. The players quickly catch up with one another before Kuroo asks Karasuno to make it through the second day. Daichi makes the same request of them before turning to leave. When they do, Shibayama notices that Kuroo and Daichi lost their smiles as he remembers how difficult it will be to make it past the second day of the tournament.

When the team makes it back to their inn, they spot the Niiyama Girls' High School team heading into the larger hotel next door. Asahi recalls the girls team winning the Inter-High and are therefore seeded. Sugawara claims the girls team is like royalty and Yamaguchi guesses the girls must have meals from a luxurious buffet.

As the boys are heading inside, Tanaka hears someone call to him and spots Kanoka near by. She praises Karasuno for their victory and wishes him and the team luck in their next match before heading to her hotel. Ennoshita quickly approaches Tanaka and points out how he now has a real chance at getting a girlfriend.

Narita and Kinoshita are annoyed at Ennoshita giving away their cover from pretending not to notice the interaction between Tanaka and Kanoka as Ennoshita continues to point out how he noticed Kanoka's behavior from their earlier encounter before the opening ceremony and guesses that she has a crush on Tanaka.

At hearing he has a chance for the first time, Tanaka is utterly stunned.

Retrieved from "https://haikyuu.fandom.com/wiki/Vivid_(Episode)?oldid=95062"
Community content is available under CC-BY-SA unless otherwise noted.