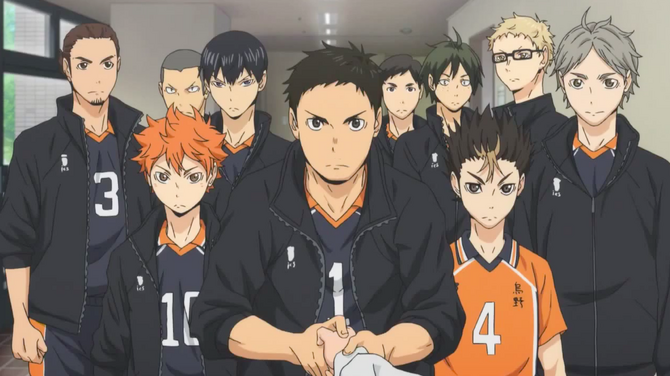 Winners and Losers (Japanese: と, Shōsha to Haisha) is the sixteenth episode of the Haikyū!! series, written and illustrated by Haruichi Furudate and published in the manga magazine, Weekly Shōnen Jump. The episode premiered on July 20, 2014.

Karasuno dominates Tokonami and easily wins the first set, but the players don't falter and continue giving their full efforts. Tokonami begins to lose hope and Ikejiri thinks back to a match from junior high where Daichi gave a speech to the team. He repeats a quote from his friend, motivating his current teammates to give their full efforts as well. Despite that, Karasuno ends up winning easily. Ikejiri is saddened by this, especially since he's a third year now, but is happy for his friend and tells Daichi to continue winning for Tokonami. Karasuno now heads towards its match against Date Tech, the team that had caused Asahi to quit volleyball.

Ikejiri runs after the ball, but fails to save it and Karasuno scores its third point. In the bleachers, Irihata notes that Karasuno has improved a lot since the practice match. Before, it was a dangerous team that only relied on brute force but now, with a coach, it has technique.

Karasuno continues dominating and it starts to look like it will win the first match easily. Tokonami doesn’t give up, but the players seem to be losing confidence. Ikejiri watches his teammates, unsure of what to do.

In a flashback, Ikejiri thinks to himself that his and Daichi’s team only made it through the first match because of luck. It went up against a powerhouse in the next match and the players were sure they would lose. Daichi remained confident and exclaimed that if they don’t have determination for themselves, they would never make it. Motivated, the players headed into the match, but became overwhelmed instantly. Daichi never lost hope, but was the only person upset by the loss. Ikejiri notes that he was jealous of that.

In the present, Ikejiri races after a ball and misses. He seems to be much more motivated at this point and calls for a toss. He’s blocked and Karasuno wins the first set. As Tokonami takes its break, the players note that Karasuno’s completely unlike its rumors. Ikejiri mutters a quote Daichi used to always say, surprising his teammates. However, he doesn’t have time to explain it before the match resumes.

Despite winning the first set already, Karasuno gives the match its full effort. Kageyama gets fives service aces until someone finally barely receives it. Tokonami celebrates and exclaims that it’s just one point, but it’s worth a lot. Ikejiri approaches his teammates curiously and Tamagawa reminds him of what he said earlier.

Elsewhere, the Karasuno girls’ team has trouble. Yui thinks back to a talk she had with Daichi earlier and slaps herself, reminding herself to be confident. One of the girls makes a poor receive and apologizes. Yui helps her get up and tells her that the match hasn’t ended yet.

Tokonami plays at its best and doesn’t lose hope, but Karasuno wins in the end. As the players pack up, Hinata stands off to the side. Kageyama yells at him and he states that they won. Hinata stares down at his hands, happy that they’re going to continue onto the next match.

Outside, one of the girls is crying and blames herself for her team’s loss. Yui reassures her before being called away. As she leaves, one of the members notes that Yui practiced the most out of all of them, but doesn’t seem to be upset. She’s interrupted by another member who reveals that Yui only stays composed since she’s the captain. When she’s away from the team, she’ll start crying.

Ikejiri sits on a bench at the waiting hall, thinking to himself that he gave his all, but now it’s all over. He notes that he should’ve trained more as Yui thinks the same elsewhere. Suddenly, he stands up, making a decision. He finds Daichi with his team and asks him to win for Tokonami. Daichi shakes his hand and agrees.

Karasuno goes to the waiting hall. Hinata overhears other players complimenting him and smiles happily, but stops when he sees Kageyama staring at him. Kageyama replies that it’s good for Hinata to receive all that attention because that will help take the focus off the other players and enable Hinata to perform his duties as the decoy. Ukai comes over and agrees. He goes over the starting lineup for the next match before dismissing the members. Sugawara seems to be worried about something.

Hinata and Kageyama go outside and toss to each other. Kageyama reveals to Hinata that it was the match against Date Tech that caused Asahi to quit volleyball. As Hinata thinks over this, Sugawara approaches them. He bows and asks the two to use their abilities to help Asahi win this match.

The match against Date Tech soon begins. Hinata exclaims that they’ll win it too just as Aone passes by him. He quickly hides behind Tanaka after Aone looks at him. The spectators note that Date Tech is scary and reveal that the spiker from the last match couldn’t do anything at all. Asahi watches the opponents intensely.

Karasuno begins its warm-ups and Nishinoya performs his signature rolling thunder. Tanaka teases him as Hinata begs him to teach the move to him. This helps everyone relax and Nishinoya announces loudly that there is nothing to worry about. He tells everyone to keep looking forward because he’s there, watching everyone’s backs. Reassured, the players head into the game.

The showdown of Karasuno against Date Tech begins.

Retrieved from "https://haikyuu.fandom.com/wiki/Winners_and_Losers_(Episode)?oldid=70312"
Community content is available under CC-BY-SA unless otherwise noted.