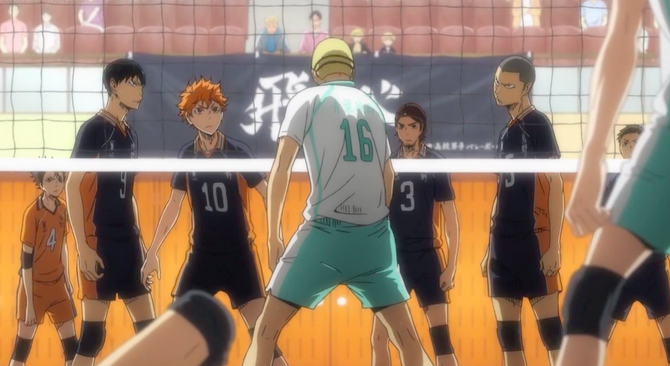 "Wiping Away" (Japanese: , Fusshoku) is the twentieth episode of Haikyū!! Second Season, based on the manga Haikyū!! by Haruichi Furudate. The episode premiered on February 20th, 2016.

Aobajohsai starts the match with Oikawa's serve, and the team is able to recognize that Karasuno has improved immensely as a team. Despite Hinata and Kageyama's new quick having been altered slightly, the Seijō third-years are able to think of a tactic to narrow its path to one they can handle more effectively. Karasuno pulls ahead in the first set, but a new player from Seijō is subbed in and completely changes the rhythm of the game.

As the teams are warming-up, a stray ball stops in front of Tōru Oikawa. He leans down to grab the ball and at the same time so does Kageyama. The two right away fight for the ball while Oikawa taunts Kageyama of how he beat him during their last game. Kageyama promises that the same thing will not happen again while Oikawa suddenly releases the ball and sends Kageyama flying back while saying that the only person fit to face off against him is Wakatoshi Ushijima.

Shigeru Yahaba is looking over at the Karasuno side and mentions to Yūtarō Kindaichi that Karasuno has another girl manager, much to their envy as they both find Yachi very pretty. Yahaba attempts to speak with Yachi as he tosses a ball in her direction and calls out asking for her assistance. Suddenly, Takahiro Hanamaki misses a receive and the ball is sent flying right to Yachi. Though Yahaba attempts to save her, Kiyoko is the one to block the ball before it reaches Yachi. Yahaba and Kindaichi find this appealing but Tanaka stops them as he returns the ball to Yahaba with a glare of intimidation. Having failed, Yahaba walks back over to Kindaichi and is called shallow by the first year. Yahaba shrugs it off and walks away only to bump into their returned teammate, Kentarō Kyōtani.

Hinata notices Kyōtani and questions Kageyama if he had always been part of the Aobajohsai team. Kageyama simply answers that he is unsure.

Oikawa and Daichi are called forward. They shake hands and hope for a good game. Oikawa asks of Daichi's recovery then compliments that he seems more dignified. Daichi simply answers that he and the team have grown in the last several months, thanks to some odd new friends, mostly Tetsurō Kuroo and Kōtarō Bokuto. Karasuno wins the coin toss and Daichi announces they will be receiving. The teams line up and thank each other.

In the stands, Yūsuke Takinoue arrives and joins Makoto Shimada and Saeko Tanaka. He is amazed that Karasuno has made it to the semi-finals and Saeko becomes more excited when she learns the team could advance to nationals if they win their matches against the next two teams.

Coach Nobuteru Irihata talks to the team of how this is the third time they have gone against Karasuno and each time Karasuno has surprised them in some way. Irihata assures the team that if they stay calm and give it everything they have, victory will surely be theirs.

Oikawa steps forward and admits that the Karasuno team is a very strong opponent. Hanamaki is amazed that Oikawa would admit such a thing about another team. Oikawa admits that he is taking their last match to heart and will not let his guard down during this game. As he walks toward the court, the third years announce their trust in him; surprising Oikawa and the coaches. Oikawa lightly chuckles and tries to tell them that he trusts them as well but the third years then add that Oikawa's first serve should land or else he will owe them and the team ramen after the game.

Takeda voices how the crows' broken wings are now healed and they are even stronger than before. The time has come for the boys to go out and show how hard they've trained to become better. Ukai next speaks to the team and right away points out that Seijoh is a bad matchup for them, stunning the team with his bluntness, and says they will need to overcome Seijoh's poise and adaptability in order to win. He urges them to prove to Seijoh they are more than they appear. They are dismissed and the starting players take their places on the court.

Oikawa is first to serve and though his team call for a good serve the third years continue to taunt Oikawa with ramen dishes. Oikawa can't tell if they want him to land a serve or not but Hanamaki is confident that Oikawa will not only land the serve but he will also crush their dinner plans.

Kindaichi is soon surprised when he notices Nishinoya doing a jump set and Asahi lands a spike with a back attack, cutting off Oikawa's serve. Though the team celebrates this accomplishment, Sugawara questions why Nishinoya and Asahi are the two most surprised of their attack succeeding.  Kageyama serves but the ball goes too far to the side and lands out of bounds. Iwaizumi serves next and Asahi is able to receive but the ball goes long. Akira Kunimi jumps to get the ball but Kageyama is able to reach it first and set the ball to Tanaka who lands a spike. His successful spike earns him the praise of his team and coach but mostly from Saeko who loudly cheers for her brother, causing Tanaka to be embarrassed by her outburst.

Tsukishima attempts a spike but the ball is received by Issei Matsukawa. Hajime Iwaizumi calls for the ball but Tsukishima watches closely and waits until he sees Oikawa set to Hanamaki. He blocks the ball and it lands back on Aobajohsai's side. Hanamaki angrily apologizes but Oikawa takes the blame for it, saying the set was too low.

As Tsukishima goes to serve, Hinata rotates in. Shimada and Takinoue are amazed at how the two teams are playing against one another already and Shimada believes now should be the time for Hinata to land a quick attack. Saeko questions what they are talking about and the two explain how Hinata's quick attack was shut down during the previous game against Seijoh and the game was lost.

Tsukishima serves and the ball is received by Shinji Watari. Oikawa sets to Iwaizumi who just barely manages to get by Kageyama and Hinata but Daichi is able to save it. Hinata goes in for a spike but is blocked by Kindaichi. Tsukishima quickly saves the ball but it's sent back to Aobajohsai.

Kageyama gets ready to block and notices that Hinata had gotten himself so worked up he hadn't noticed Kindaichi. As Oikawa saves the ball, Kageyama roughly kicks Hinata and yells at him to calm down. Watari sets to Iwaizumi and Hinata manages a one-touch on his spike. As Asahi receives and sends the ball to Kageyama, the team reflect on Hinata's blocked quick from the previous game and beg him to avenge that lost point. Kindaichi jumps to block as Hinata prepares to spike with the new quick attack but Hinata ultimately makes it through and scores when he shoots to Kindaichi's left and Watari is unable to receive.

The Seijoh players realize that they will have a problem if Hinata and Kageyama are able to continue doing the quick attack but Oikawa advises them to just wait and see what the game will tell them. The game continues and Daichi is able to pick up another one of Oikawa's serves. Hinata rushes to the far side of the court and successfully lands a quick attack near Watari, though the whole time Kageyama is questioning if Seijoh will be handling the quick with receives and Matsukawa is shown noticing a possible way to counter.

Kageyama serves next. Watari receives and Hanamaki sets to Kunimi who gets by Hinata and Tanaka and lands the spike. Iwaizumi serves but hits the net and barely misses Kunimi. Eventually, Matsukawa rotates in and right away calls over Kindaichi and Hanamaki.

Kindaichi serves and Tanaka, having known exactly that Kindaichi would aim for where the setter would come from the back row, receives the ball and sets to Kageyama. Hinata charges to one side but is surprised to see Matsukawa is following him. Matsukawa jumps to block and Hinata spikes the ball only for it to go directly to Kindaichi. A quick flashback reveals Matsukawa informing Hanamaki and Kindaichi that there is the possibility they can ignore the cross shots and focus on the line shots, limiting Hinata's place of where to aim his spikes and making it easier for Seijoh to receive. Matsukawa lands the final shot and is praised by the team for his plan. Kageyama notices Seijoh's counter plan for Hinata's broad strikes.

During the next rally, Watari sends the ball up and Hinata silently reminds himself of what Sugawara mentioned of waiting just a bit longer during one of Seijoh's quick attacks. He jumps and blocks Kindaichi's spike, earning a point for Karasuno. Ukai is proud of the team for remembering things from their previous game against Seijoh and are using that to their advantage. The Aobajohsai coaches notice this behavior as well.

After Kindaichi spikes and scores, everyone becomes uneasy when they see Oikawa is next to serve. Iwaizumi notices how focused Oikawa seems to be and covers the back of his head, warning Kindaichi to do the same. Oikawa serves and although Daichi and Nishinoya are prepared to receive they fail to see Oikawa's serve until it had already hit the floor. Although it landed out, the entire Karasuno team is stunned by the power behind the serve.

Daichi refers to it as a spike instead of a serve and questions if it was just a fluke. But he discards that thought knowing that Oikawa doesn't play that way and wonders if Oikawa increased the power of his serve on purpose even though it carried a lot of risks. Nishinoya is incredibly excited at seeing Oikawa's serve and asks for another one as he wishes to try to receive it.

With Karasuno now at set point, Kageyama goes to serve next. His serve is received by Watari and Oikawa sets to Iwaizumi who scores and brings them one point away from a deuce. As Daichi is advising the team to keep calm and stay focused, Seijoh makes a sudden switch.

Hinata and Kageyama notice that the player they had spotted earlier is being switched in for Kunimi. As Kyōtani is unknown to any of them, Daichi guesses Seijoh may be trying to strengthen their block and warns the players to try not to give away their spikes.

The set continues and Iwaizumi serves. Daichi receives but the ball is short as Kageyama goes to set for Tanaka. Hanamaki gets a one-touch on Tanaka's spike. Watari sets the ball to Oikawa and Oikawa prepares to send the last hit to Kindaichi.

As the ball is set, Kyōtani rushes in. Kindaichi is knocked over and Kyōtani aggressively hits the ball, getting by Hinata's attempt to block.

Takeda compares the new addition as a new gear being added into the machine and changing everything they thought they knew.

Retrieved from "https://haikyuu.fandom.com/wiki/Wiping_Away_(Episode)?oldid=95659"
Community content is available under CC-BY-SA unless otherwise noted.