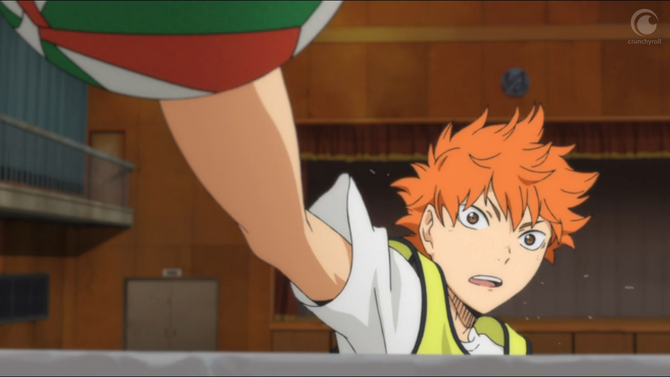 Yearning (Japanese: れ, Akogare) is the tenth episode of the Haikyū!! series, written and illustrated by Haruichi Furudate and published in the manga magazine, Weekly Shōnen Jump. The episode premiered on June 8, 2014.

As Asahi regains his confidence as the ace, Hinata and Kageyama finally get to use their quick. Ukai's shocked at the two's coordination and Kageyama's skills, which he compares with Sugawara's dependability and experience, further complicating his decision on which player to pick as the official setter. On the side, Hinata gets distracted as he compares himself with Asahi and how he would never attain that level of strength. However, after a mishap and encouragement from Kageyama, Hinata finally understands his importance to the team as a decoy.

Asahi spikes past Kageyama, Tsukishima, and Tanaka as the first years and Takeda watch on with awe. Sugawara praises Nishinoya and Asahi and after the ace compliments them back, he and Nishinoya smile happily. Hinata watches Asahi in shock, remarking to himself that that’s what an ace looks like. Kageyama calls him and warns him not to get scared. Hinata brushes him off confidently and exclaims that it’s their turn to show off now.

On the side, Takeda excitedly exclaims that with Nishinoya’s receiving abilities, the team would be invincible, but Ukai quickly cuts him off. He explains that saves like that aren’t always possible due to the speed the ball goes at. Even so, Ukai notes that the rest of the team’s receiving skills need a lot of work. He then watches Kageyama toss the ball, wondering who he’s going to pick as the official setter of the team.

Kageyama is given the ball and tosses it to Hinata, who spikes it onto the other side before anyone can react. A shocked Asahi thinks back to what Hinata said about how Kageyama helps him get past any blocker. Asahi notes that Hinata wasn’t actually exaggerating. On the side, Ukai’s confused by Kageyama and Hinata’s lack of signals and calls out to Hinata, scaring him. He asks the first year why he jumped and Hinata replies simply that the ball always goes wherever he jumps. His answer confuses Ukai even more as he can’t understand how the two were able to coordinate so well, but he mostly chalks it up to Kageyama’s genius abilities. He compares the prodigy Kageyama with the experienced Sugawara and remarks happily that the current Karasuno’s pretty good.

Much to his excitement, Hinata gets positioned in front of Asahi. Asahi spikes and is surprised by the height Hinata jumps to block him. Though the ball still goes over, Asahi states that it’s amazing seeing Hinata’s jump. Hinata watches the ace, reminded of the Small Giant, and points out Asahi’s skills. Kageyama begins to say something, but changes his mind.

The match resumes and Hinata’s distracted by Asahi’s height and power. As he’s thinking about how much he wants to be like the third year, Asahi spikes the ball–right into Hinata’s face. The match is paused as the team gathers around the first year, with Asahi and Takeda freaking out. Hinata sits up and hurriedly tells everyone that he’s fine, but stops when he sees a livid Kageyama.

Kageyama yells at Hinata for spacing out during the match and points out how Hinata was too busy thinking about how much he wants to be the ace. Hinata tries to deny it, but Kageyama quickly states that he’s jealous. Hinata admits to it defensively, exclaiming that Kageyama would never understand his feelings. The setter doesn’t reply and they go back to playing.

Just as the match begins, Kageyama announces to Takinoue and Asahi that he would be tossing to Hinata next, much to everyone’s surprise. Kageyama tells Hinata that at the moment, he’s clumsy and can’t ever become the ace but as long as he’s here, Hinata would be the strongest. He points out that with his toss, Hinata had never gotten blocked. Hinata thinks over his words as Kageyama prepares their move.

The setter tosses the ball and Hinata runs to one side of the court; just as the blockers rush to that side, the first year quickly switches to the other side. He thinks to himself that it’s true he’ll never have the same power as Asahi, but he has Kageyama. Hinata scores and Kageyama explains how he and the ace are the same in that they both score for the team. He asks Hinata if he still thinks being a decoy is lame. Encouraged, Hinata shouts that he doesn’t.

Now that Karasuno’s in its top shape, the Association members start playing more seriously. Shimada serves a jump float, sending the opposing team into chaos. Because of this, the association’s able to take four points before Daichi finally receives it. The ball’s sent to Asahi, who spikes and wins the match for the association.

After cleaning up, Ukai rounds the team up and points out their poor receiving abilities. He announces the training for the next day and dismisses the members. Hinata approaches Asahi and says that he’ll create the pathway for the ace and become the strongest decoy. Asahi replies that no matter what anyone's position is, the player whom the enemies fear the most is the coolest. Hinata happily agrees.

Asahi nervously adds that he’ll do his best too, if he’s allowed back into the team. Sugawara laughs at him and Daichi remarks that they finally have their libero and ace back. The players then huddle up.

Retrieved from "https://haikyuu.fandom.com/wiki/Yearning_(Episode)?oldid=95131"
Community content is available under CC-BY-SA unless otherwise noted.